As I was dropping some gear back to our support team yesterday morning after the weekends RGU Hackathon, they queried if I would be able to assist some of my students with their coursework for a module I teach titled “Interactive Multimedia” – their task being to research, design, develop a presentation, video and interactive and tutorial on how to setup and fly a Quadcopter. Generally we require our students to get a good few training sessions before being left to fly the Quadcopters all by themselves.

Given it was such a lovely morning with clear blue skies and no wind, it was absolutely perfect conditions for some Quadcoptering. So we grabbed one of the Schools DJI Phantom Quadcopters, some batteries and went out to a few locations around campus to grab some footage of the Quadcopter setup and operation. The following images below should give you some idea of the morning we had. I must say that all the landings were perfectly executed. Was a great morning to be outside too, rather than stuck in front of a computer screen and keyboard. 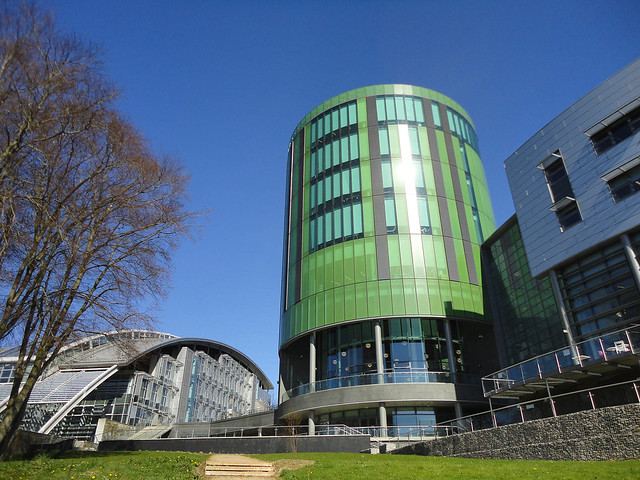 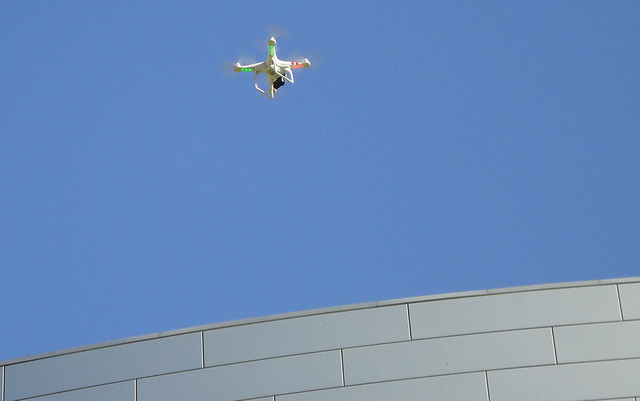 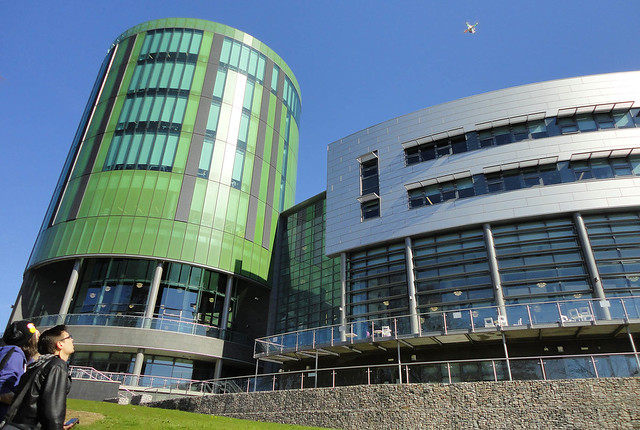 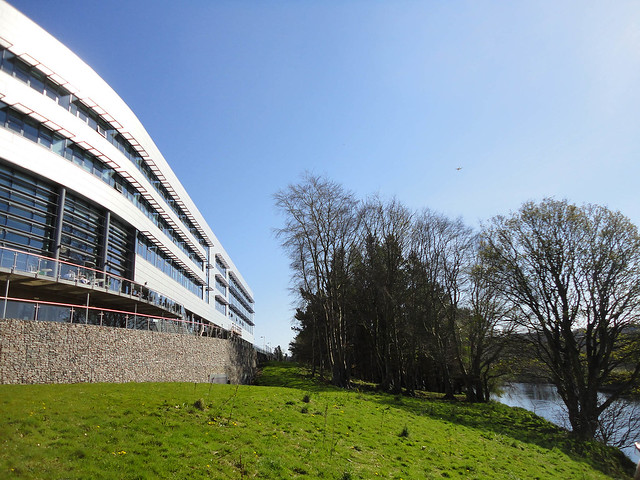 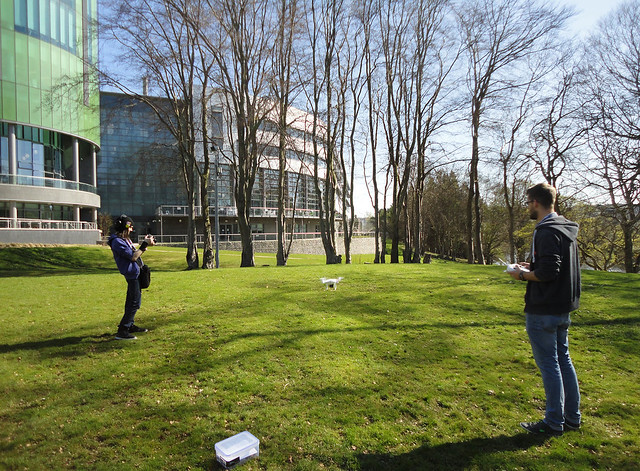 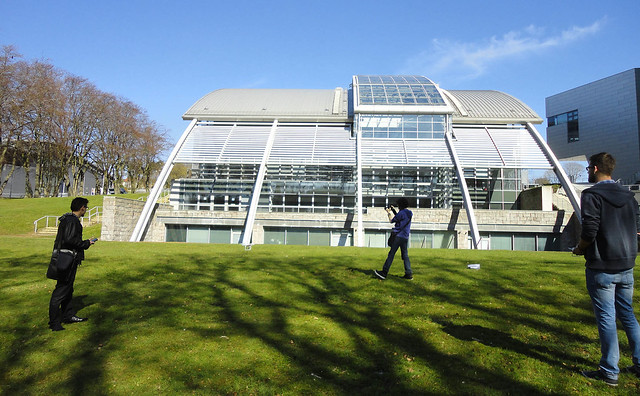 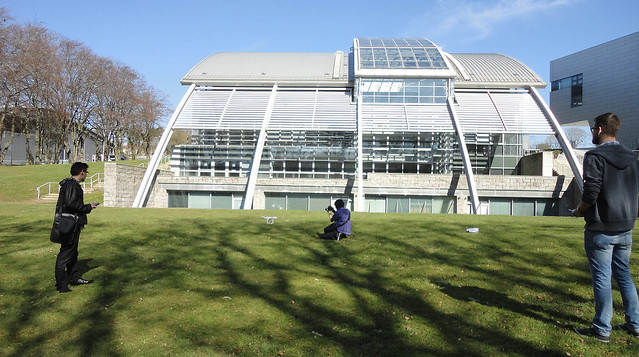 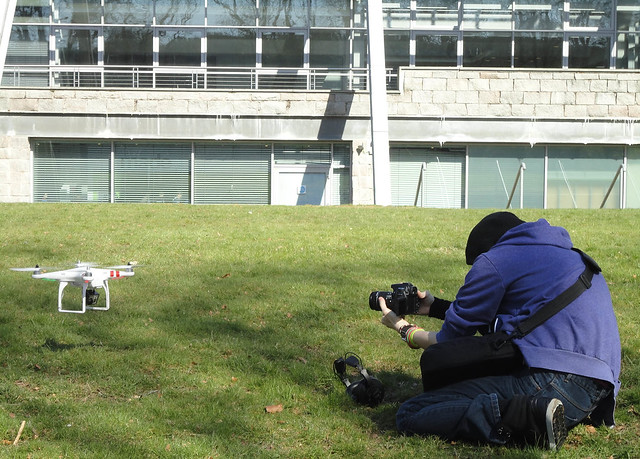 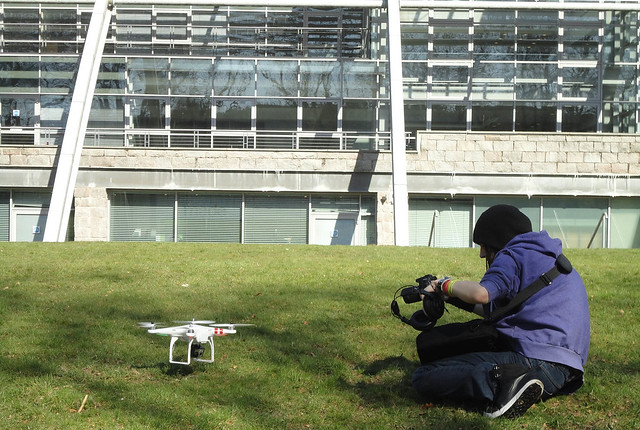 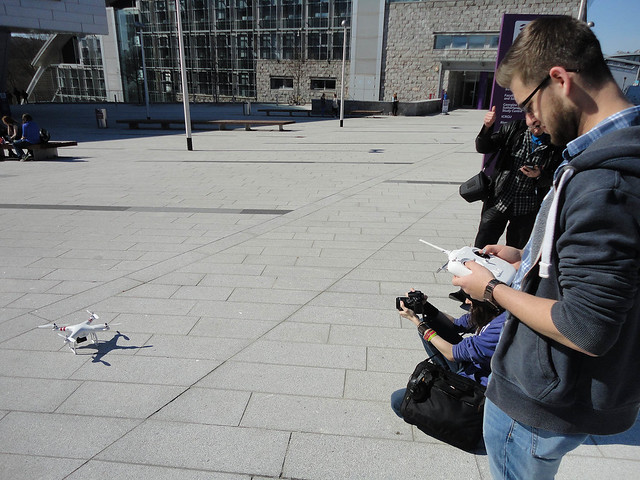 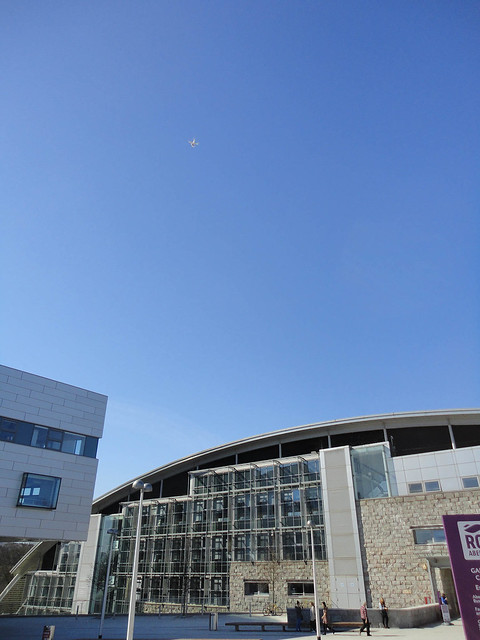 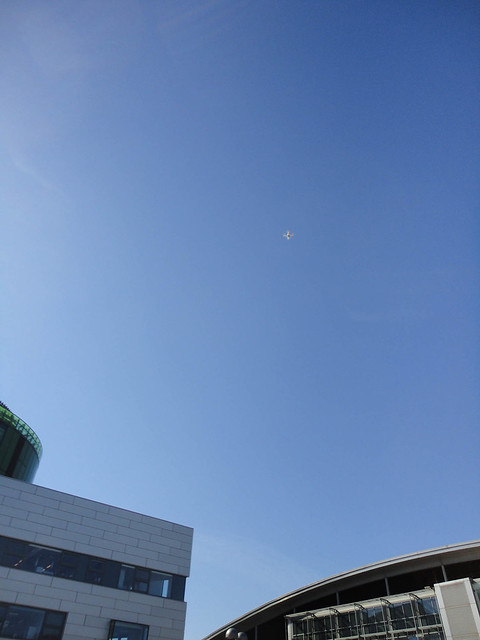 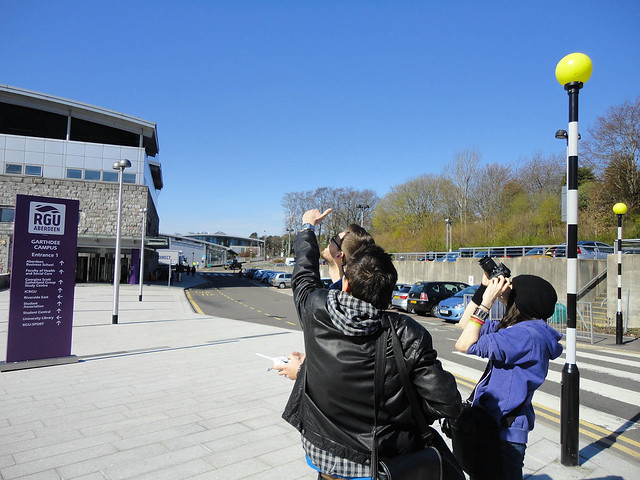 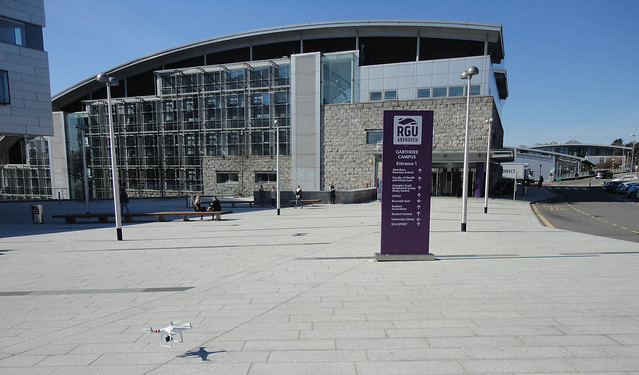 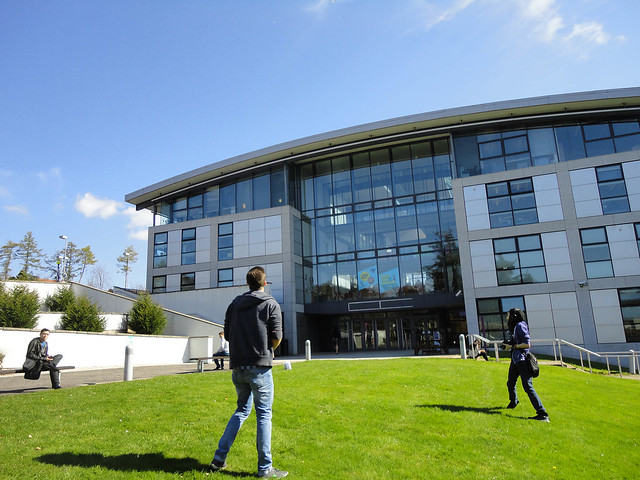 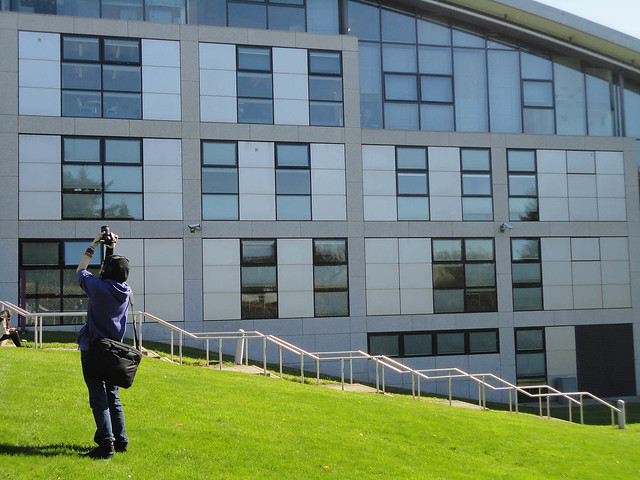 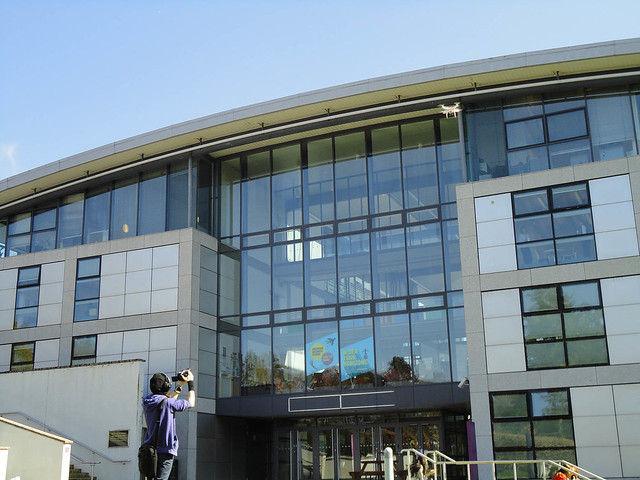 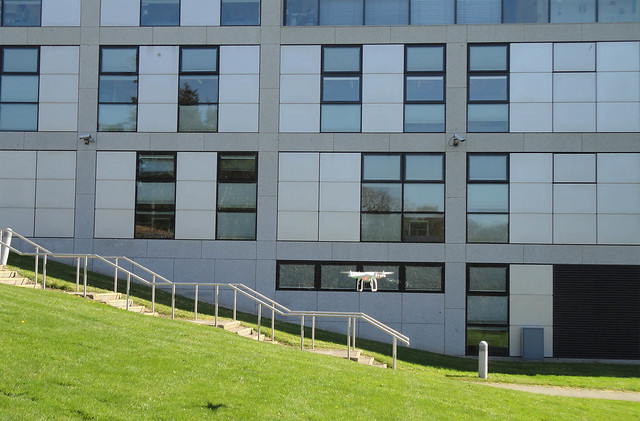 Some views over Duthie Park and Aberdeen recorded using a Kodak Playsport under-slung from a DJI Phantom Quadcopter. The following YouTube Playlist contains some additional videos from the test flights. The off center mount positioning of the camera, coupled with it hanging well below the landing struts resulted in quite a significant pendulum effect, hence the “Jello” nature of the footage. Replacing this with a Go Pro should significantly improve to resulting captures.

The following is just a series of videos of us having some fun flying a DJI Phantom Quadcopter around Duthie Park early one Saturday morning. Check out the following YouTube Playlist to see some additional videos and some birds eye views.

Crash Bang Wallop that’s what happens when a DJI Phantom Quadcopter decides to stop responding to commands from the transmitter. This particular flight took place in Duthie Park which happens to have quite a significant area of open space surrounded by trees. It just so happens of course that the quadcopter would go out of control close to these trees and end up caught up in a number of branches perhaps 15 to 20 feet up. Talk about a rock and a hard place !

So the big question is how do you get a a quadcopter down from a tree. Well as it turns out a cricket team were just passing by at the time about to play a game. So they got a chance to warm up by bowling some cricket balls at the quadcopter. You often hear of the saying “third time lucky”. Well it happen to be true in this case. On the first attempt a football was kicked towards the branches holding to copter in place, but to no avail. Second attempt was with a cricket ball, yet again no success. The third and final attempt the cricket ball made perfect contact and down came the quadcopter, no worse for ware, as you can see in the video below.

Moral of the story, if you are going to be flying quadcopters around anywhere in proximity to trees then bring along some cricket balls, or better yet a cricket team ! On that note I should say thanks very much for all the help of the footballer and bowler. Check out the following YouTube Playlist for more videos around the RGU Garthdee campus and Duthie Park.

The following videos give some sense of the setup procedure for assembling the DJI Phantom Quadcopter and taking it for its first series of test flights with a video camera under-slung.

A few stills around Duthie Park flying the quadcopter around and filming same. The still images were extracted from video recorded using a Kodak Playsport under-slung from a DJI Phantom Quadcopter (recorded at 1920x1080P 30fps). The following YouTube Playlist contains a number of videos recorded at RGU Garthdee campus and Duthie Park.

The following photos give some sense of the setup process and the first test flight of the DJI Phantom Quadcopter. We started with one Kodak Playsport video camera under-slung from the quadcopter, for the next flight we decided to add a second camera using a bundle of elastic bands to hold it in place. The addition of the second camera added greatly to the vibrations from side to side (Jello effect of the footage). Given the off centre mounting of the Playsport coupled with it hanging down quite a bit below the landing struts, a significant pendulum effect(like that of a grandfather clock, but at a much higher frequency) could be seen. As a result much of the footage (recorded at 1280 x 720P 60fps) was really quite unusable, especially when the craft was ascending or descending.

The Playsport weighs 127 grams, hence the load with two cameras was 254 grams. According to the user manual the take-off weight should be less than 1200 grams. The manual also mentions that the quad-copters weight including battery is 800 grams. The 2200mAh LiPo rechargeable battery (see technical features) weighs in at 170 grams and provides 10 to 15 minutes of flight time. Therefore copter + two playsports comes in at 1054 grams well within the maximum take-off limits.

Assembly took just a matter of minutes consisting of attaching the two landing struts, the fitting of the propellers and attaching the camera mount. Then it was just a matter of installing batteries and powering on the controller followed by the battery for the copter. Shortly after that we were ready for the first test flight. The following YouTube Playlist contains a number of videos recorded at RGU Garthdee campus and Duthie Park.