On Saturday 23rd September 2017 a 24 hour Hackathon called “Hack The Midlands” kicked off at Millennium Point in Birmingham. Around 150 attendees turned up to share in the adventure of writing some code in teams. Quite a variety of participants took part including students from Birmingham City University, Aston University and the University of Birmingham. Other participants included a number pre-university and several whom had graduated several years before. It wasn’t just students of computing taking part either, but also had participants from disciplines such as Maths, Physics and Psychology. Some of the participants travelled quite a distance to take part in the Hackathon, with several coming from St Andrews up in Scotland and one all the way from Italy. Nine Workshops were also taking place during the event, covering things from web development and Node.js to VR (online).

It wasn’t all just about writing code either with many teams working of electronic based projects such as a 3D Printer, Arduino, Breadboards and the like. A good bit of soldering and de-soldering was also taking place. Was really great to see a diverse range of ideas and projects being brought to light. For some this was their first Hackathon, for others they had been to many before as some of the images below of laptops covered with Hackathon stickers can attest to. A few mascots were also to be found dotted around the desks such as “Otto the Octopus”. 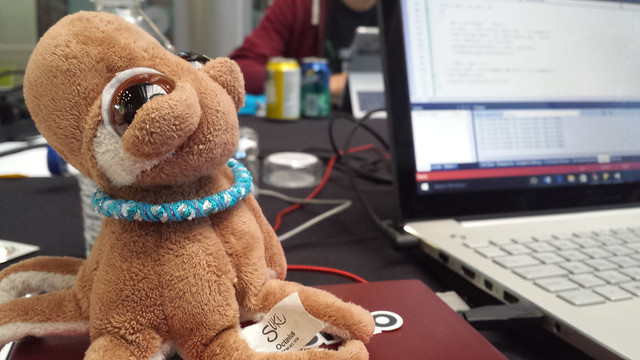 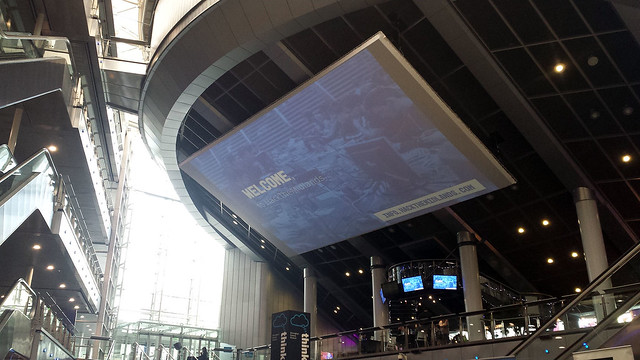 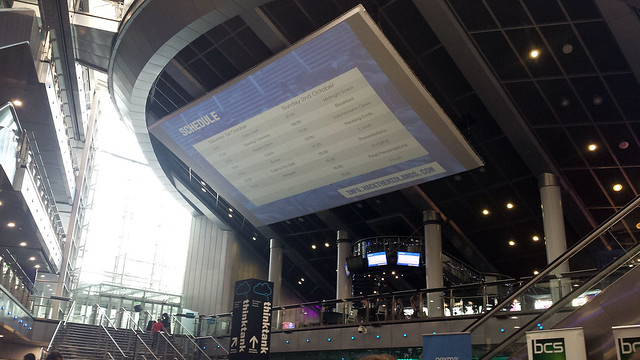 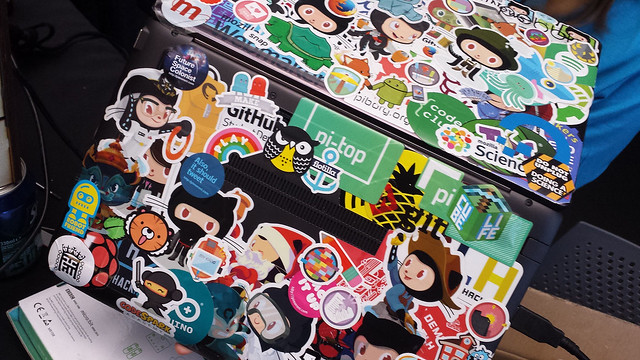 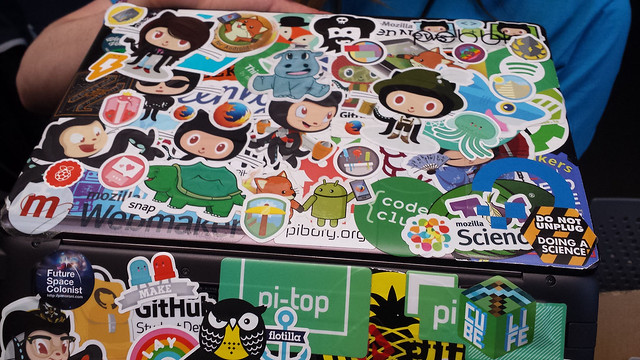 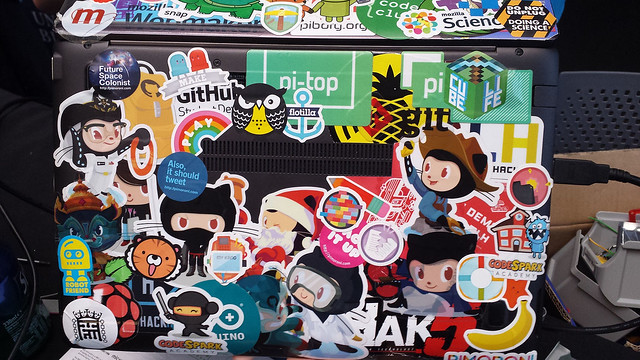 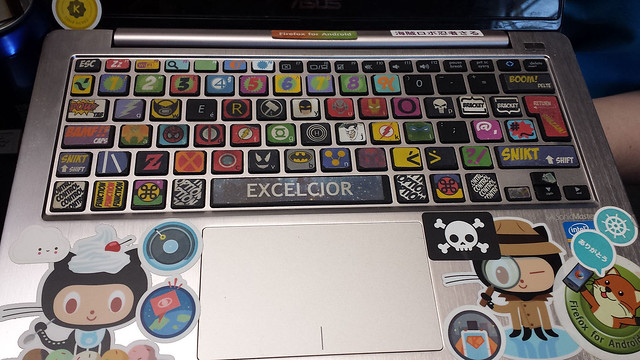 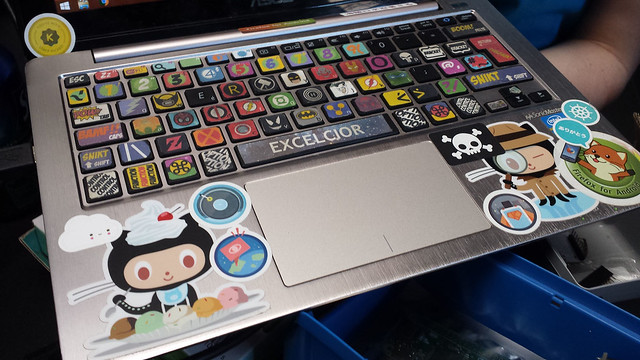 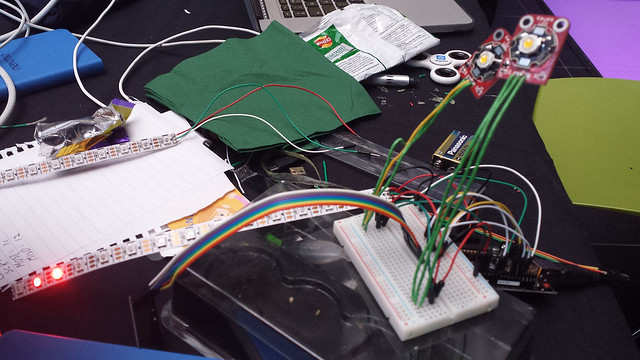 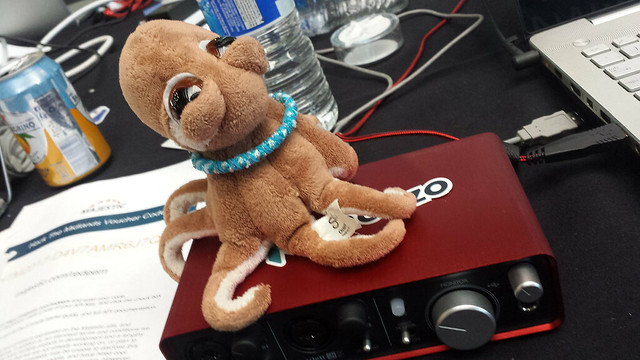 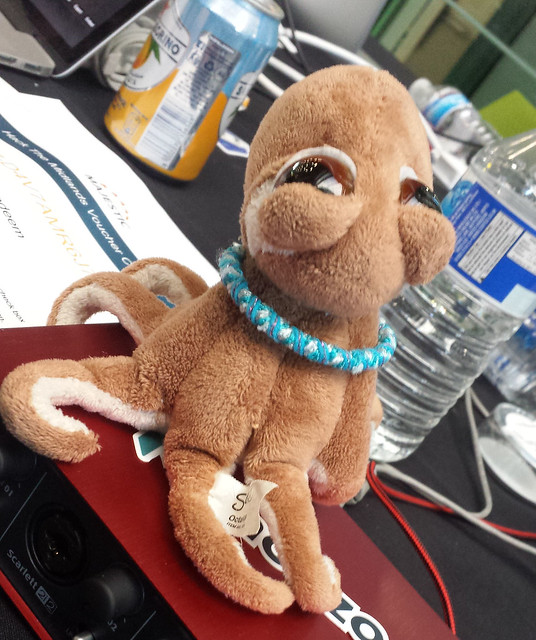 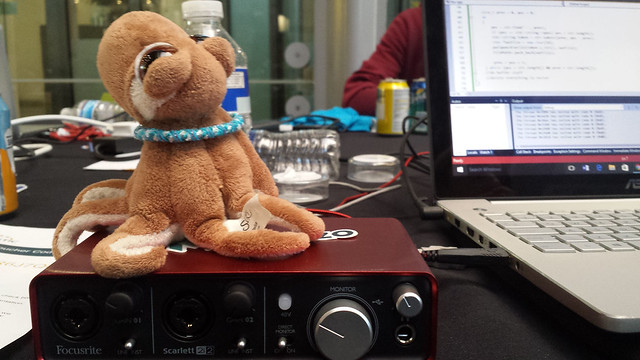 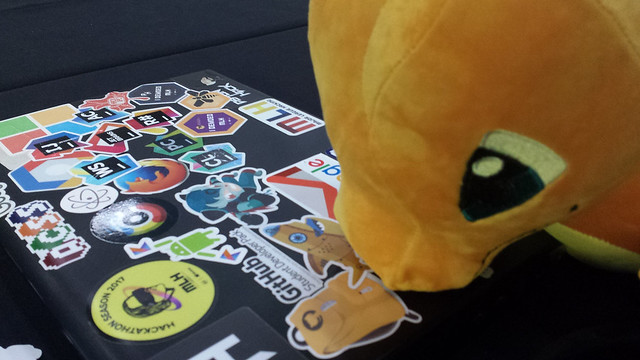 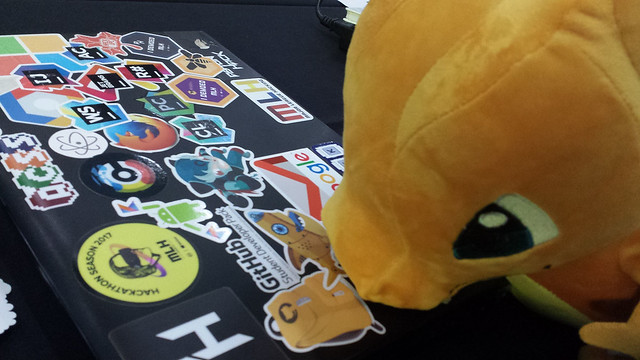 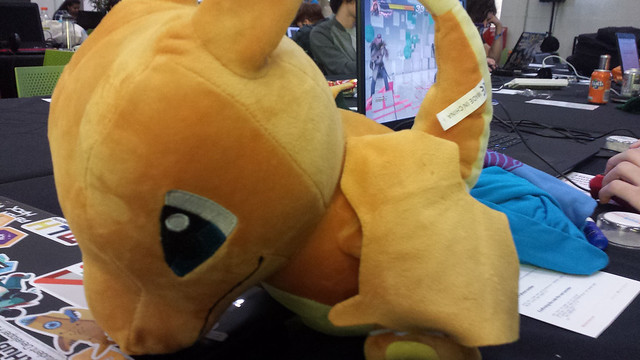 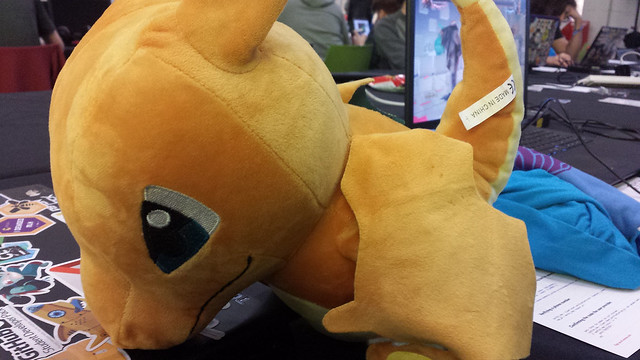 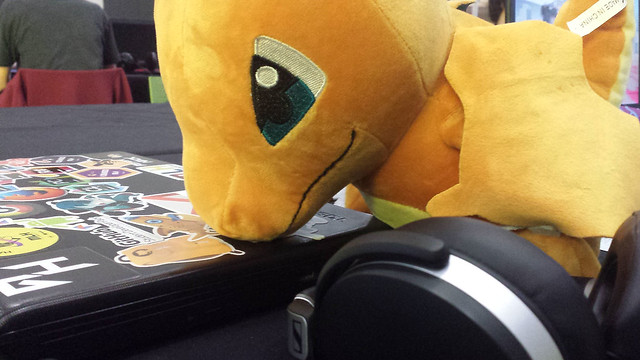 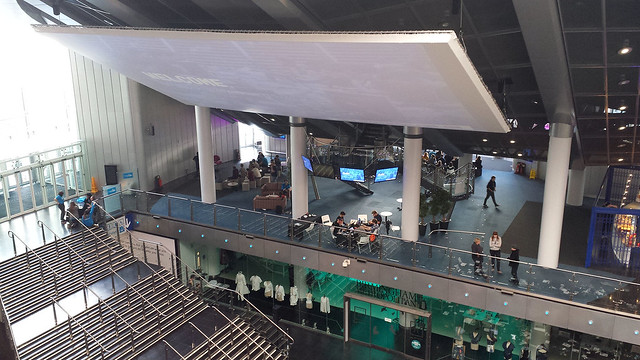 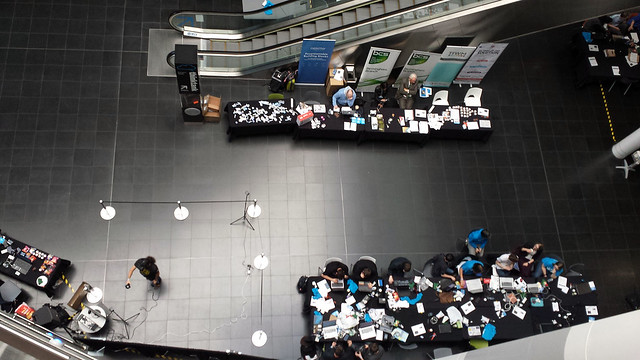 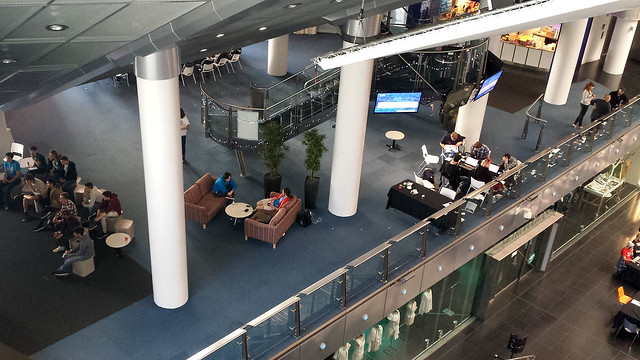 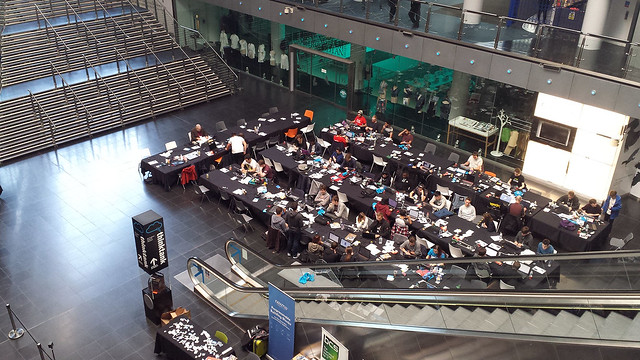 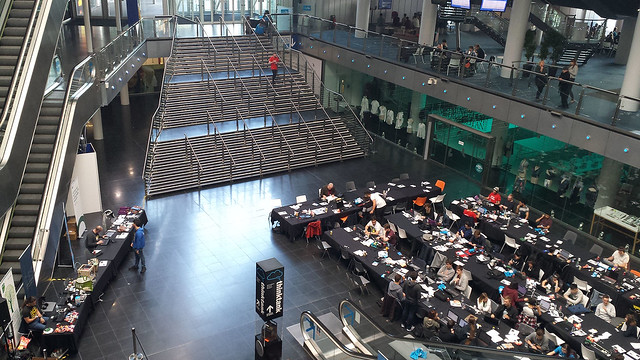 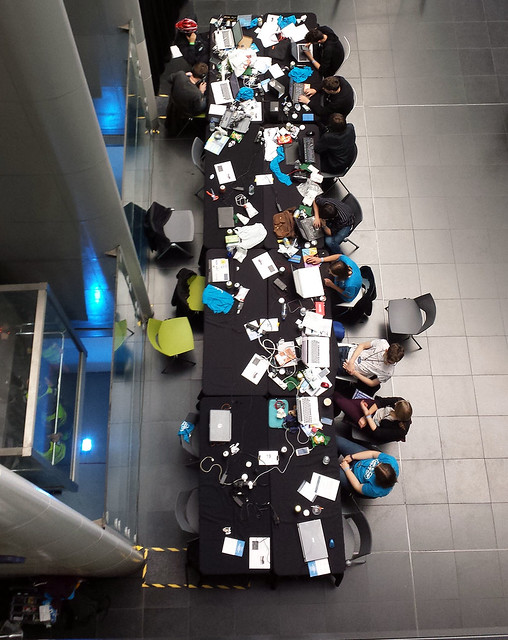 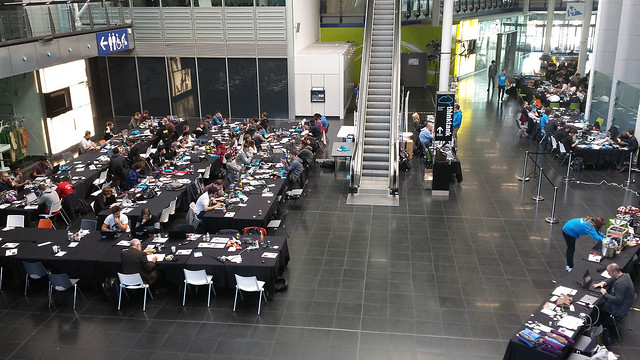 Keeping Cool
The 3D Printer Project was really quite interesting on two fronts. Firstly for the seemingly random parts deposited in the base and secondly for the innovative use of soft drink cans to elevate the printer to help facilitate systems cooling. 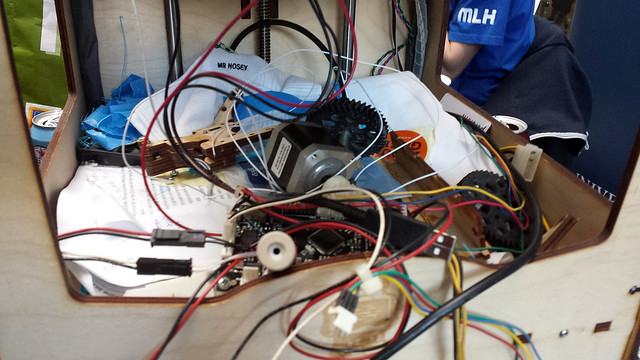 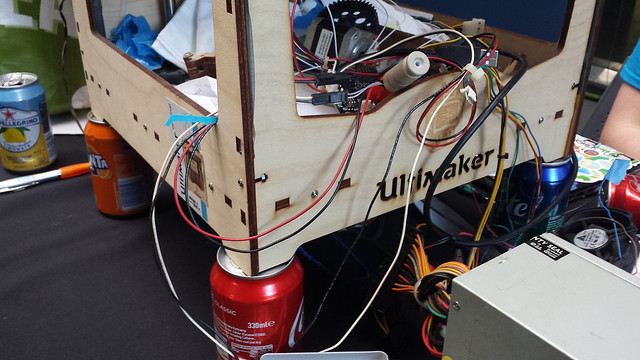 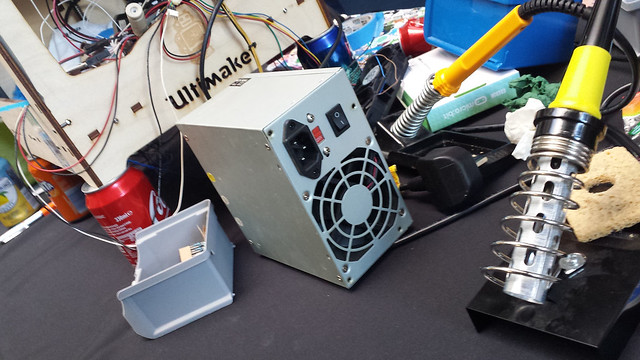 Day 1 Tweets
Below can be seen a selection of twitter posts from the first half of the Hackathon event.

We are proud to be part of #HackTheMidlands , support the next generation of coders and celebrate #NationalCodingWeek pic.twitter.com/KXuRcFwa7J

Programmers beavering away at #HackTheMidlands 2.0! We're proud to be hosting lots of #Birmingham #STEM talent. 💻🎮💾 pic.twitter.com/gwjEij45rN

Our final talk of this evening is Super Scale Mobile Apps with Mark Olleson from @Bloomberg #HackTheMidlands pic.twitter.com/cHNXQxyTGP

Plenty of swag at #HackTheMidlands with every attendee receiving a free t-shirt! pic.twitter.com/tmMPqi1T9i

Volunteering at #HackTheMidlands and SO excited to see what people come up with this weekend! pic.twitter.com/XNTMTF7aWi

ASCII Art via SMS 🤓 Just part of the crazy hacks at #HackTheMidlands pic.twitter.com/C0UfYOVUpH

Next at #HackTheMidlands are the Intro to @Docker and Newbies Guide to API's workshops! pic.twitter.com/yN4liFRW6y

Currently we've got our Intro to Web Dev and Intro to Node-RED workshops! #HackTheMidlands @NodeRED pic.twitter.com/PsOtw2adi4

On my way to #HackTheMidlands 😄

This evening we've got our Intro to Web VR Games and Getting Started with the Nexmo Voice API workshops! #HackTheMidlands pic.twitter.com/LoHg68ir5w

Can we encourage #collaboration in #research? Any examples out there? Anyone publishing proposals before starting work? #Hackthemidlands

To gain insight into Computer Science, our Y13 student is participating in #Hackthemidlands with Miss Valibhai #LetTheHackingBegin pic.twitter.com/mx4mWCoL3j

If anyone is wondering snacks & drinks are upstairs! 🍴☕ #HackTheMidlands

The Opening Ceremony is at 11! We're looking forward to meeting you all 💕 #HackTheMidlands

Make sure you come check out the hardware lab for some cool tech to use in your projects! #HackTheMidlands #hype pic.twitter.com/brYfirIZUU

I've forgotten my Asus zenbook laptop charger and maplin was out – anyone fancy sharing? I'm really nice I promise #hackthemidlands

2 thoughts on “A Visit to #HackTheMidlands Hackathon 2017”